Aamir Khan bares all for his new film 'Peekay' 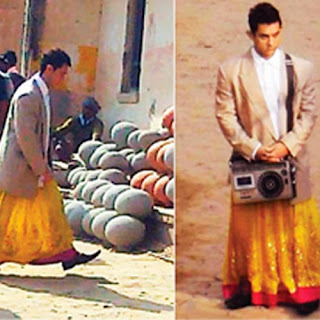 Get ready to see the actor shock and Awe audiences this year by
stripping down in 'Peekay'.

When it comes to challenging himself as
an actor, Aamir Khan doesn't leave any
stone unturned.

And this time, he's set to take the biggest leap. The actor has done a
completely bare scene (without an inch of clothing on him) in what
will easily be the biggest film of 2014 — Rajkumar Hirani's Peekay.

Full marks to the actor to go into a
territory no Bollywood actor from his
league would dare to tread. Sources from the film's unit declare that
even they were shocked when the Dhoom 3 star decided to do the
"unthinkable".

An insider reveals, "In the film, Aamir is
playing the role of an alien who lands on
Earth by choice.

The bare portion is a part of his introduction scene." Remember Arnold
Schwarzenegger did something similar in Terminator 2: Judgment Day when he
time travels from the future? In the stills
of the film which have been leaked online, Khan is seen wearing women's
clothing. That's because the 'alien'
doesn't know what to wear and blindly
apes people.

According to insiders, the naked scene
was part of the original script and Hirani
was keen to retain it in the film. "The only debate was whether Aamir
would do it himself or want to use a body double," says a source.
"After a lot of deliberation, Aamir decided to do it himself so that
it would look authentic. And he was not nervous about doing it at all.
When the scene was shot, a minimal unit was present on the set, all
cameras and phones were kept out and everyone was taken into
confidence."

Aamir is known for setting new
benchmarks — both in terms of his
performances and his box-office
collections. And oops, he did it again!