Photos: Salman Khan on the set of Kick 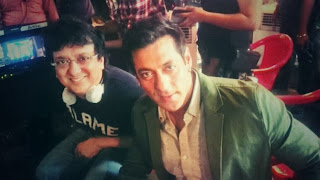 Bollywood superstar Salman Khan is currently busy in the shooting of
his upcoming film "Kick". Also starring Jacqueline Fernandez,Randeep
Hooda and Nawazuddin Siddiqui in the lead roles, the film is directed
and produced by Sajid Nadiadwala under the banner of Nadiadwala
Grandson Entertainment. Kick is slated to release on Eid 2014. Here is
a picture from the set of the film ft. Salman Khan and director Sajid
Nadiadwala.