Rohit Shetty To Direct Salman Khan In Karan Johar's Next 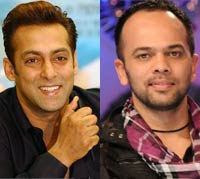 The latest buzz of bollywood is that bollywood's one of the toppest
director Rohit Shetty is ready for his next project after giving
bollywood, the biggest Grosser film of all time, Chennai Express.
According to latest report, he now wants to work with king of box
office Salman Khan.

Rohit will direct Salman Khan's next film which is produced by non
other than Karan Johar. Salman also liked the scripts of the film. But
as per sources, Rohit Shetty wants to make two more films before
Salman's project. Rohit wants to make the much awaited "Singham"
sequel and remake of Tamil new gen film "Soodhu Kavvum" before
Salman's next.

So now we can easily say that another all time blockbuster on the way.