"I don't want to work with my dad" : Shahid Kapoor 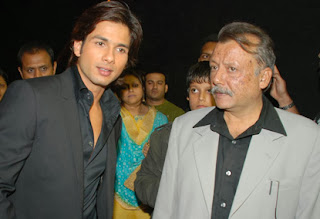 During a promotional event of his latest release "R..Rajkumar", he
cleared why he don't want to share screen space with his father.
"I would rather have him direct me. Why should I make a fool of myself
by having him act with me?....... I'll use his acting abilities to my
advantage and have him direct me. It'd be scary to work with him as an
actor."

"You feel that pressure. I'd love to work with my father because he's
a phenomenal actor. I'm scared, but if I get an opportunity, I'll take
it up. It'd be definitely intimidating to be in the same frame as him
though,", he said at that event.

Shahid worked under his father's direction Mausam in 2011. Also
starring Sonakshi Sinha and Sonu Sood, the film is doing well at
Indian box office. It has collected Rs.19.7 crore in 2 days.