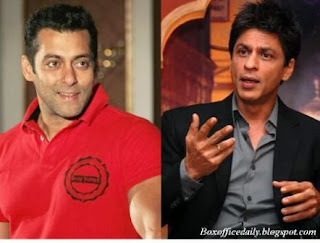 The biggest news of this time is that two biggest superstar is going
to clash at Box office. They are non other than King Khan, Shah Rukh
Khan and Tiger Khan, Salman Khan. Yes, you heard it right.

We all know that there is a big fight between both Khans. And now they
are ready for a fight at Box office window too. According to the
sources, Salman's untitled Being Human production directed by Kabir
Khan film and Shah Rukh Khan-starrer "Raees" will release on same day,
i.e. Eid 2015.

It will be the 2nd time, Salman and Shah Rukh Khan will clash at Box office. In 2006, their films "Don" and "Jaan-E-Mann" were clashed and SRK beats salman that time.
Eid is specially known as "Salman Festival" because his last
many films released on Eid and made many records at box office. While
in another hand, ShahRukh's last film "Chennai Express" which was
released on Eid this year, also created history by breaking all
previous records.

It will be interesting to see who will beat whom at Box office on Eid 2015.