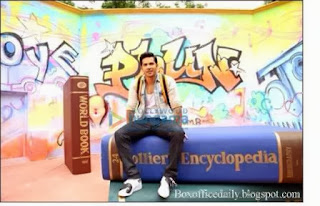 The first look of Student of The Year actor Varun Dhaawan from his
upcoming film "Main Tera Hero" is Out! Varun will seen in his upcoming
film opposite Ileana D'Cruz and Nargis Fakhri.

Varun revealed his first look on the social networking site Twiiter.
The actor is playing the role of college student in the film. Film is
directed by his father David Dhawan and is slated to release on 4th
April 2014.