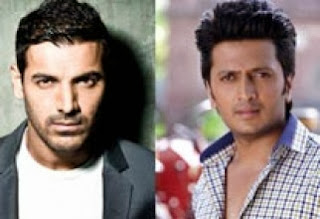 And now today's another birthday boy Riteish Deshmukh, no.1 comedian
of bollywood this time, was born in 1978 on the same day. He is the
son of well-known politician and former Chief
Minister of Maharashtra Vilasrao Deshmukh. Riteish is also a professional
architect.

Riteish Deshmukh made his debut in 2003 with Tujhe Meri Kasam opposite
his real life spouse actress Genelia D'souza. He came to limelight by
his role in commercialy successful comedy film Masti in 2004. His last
film of this year is "Grand Masti" which was collected Rs.102.50 crore
at Indian box office. He is currently busy in the shooting of his
upcoming film "Hamshakals".