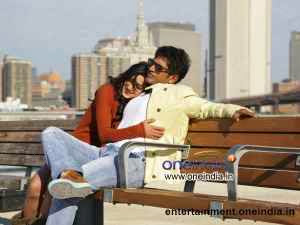 Power Star Puneet Rajkumar starrer Ninnindale is making a huge buzz
even before its release. Less than a week after the audio release, the
satellite rights of the movie has been reportedly
sold for the record price.

Apparently, the Kannada regional
entertainment channel has bought the
satellite rights of Ninnindale for Rs 6.5
crore. This is also considered as the
highest amount ever for a Puneet's as
well as a Kannada film. Recently, Shivaraj Kumar's Bhajarangi
satellite rights was sold for Rs 3.25 crore.

Ninnindale is likely to hit screens in
January. Puneet Rajkumar is paired
opposite Mumbai lass and former Miss
India 2012 Erica Fernandes, who is also making her Sandalwood debut with the
movie. Movie directed by Tollywood's
famous director Jayant C Paranji, has Mani Sharma's music, which has
become the sensational-hit among the listeners.

Apart from Puneet and Erica, Ninnindale
also features Telugu ace comedian
Brahmanandam, Tilak Shekar, Vinayak
Joshi and Avinash in the significant roles. Puneet's fans across the
state, who are thrilled with the development are eagerly waiting to
see Appu on silver
screen after one year. The actor's last
release was Yaare Koogadali, which was released in 2012. Meanwhile, Puneet is
presently busy with the shooting of
Kannada remake of Telugu film Dookudu in which he is paired opposite
Kollywood queen Trisha Krishnan.