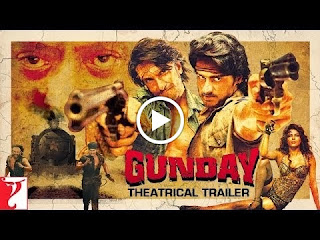 The official theatrical trailer of Ranveer Singh, Arjun Kapoor, Irrfan
Khan and Priyanka Chopra starrer "Gundey" has been released today.
Gundey is an action film. It is written and directed byAli Abbas Zafar
and produced byAditya Chopra. Film will be released on 14th Feb 2014.
It will also release in Bengali. Watch the trailer now.