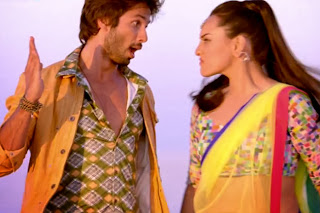 Shahid Kapoor and Sonakshi Sinha starrer R...Rajkumar, which is
released today, has got some good opening at Indian box office. The
film has embarked upon a good start in Western circuits like
Maharashtra and Gujarat while in certain circuits like Delhi/UP and
East Punjab, the start is average.

Directed by Prabhu Deva, the film has released on arround 2300 screens
in India. Film has managed 45% nationalwise occupancy in its opening
day. In other side, bollywood critics have given poor review for the
film. But audiences are enjoying film.

Its first day collection is expected to be in the range of 9-11 crore
nett. Wait and watch.