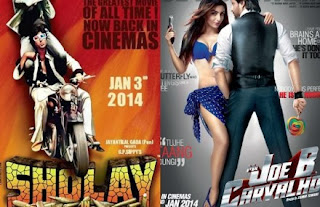 Old is gold and content is the king, these facts were proved right
last weekend. Golden hit ''Sholay'' did fairly well but new release
bite the dust due to poor content.

''Mr Joe B. Carvalho'' was a mid - size release across 1000 screens
and film was hit by bad reviews. Film failed to grow on Saturday and
managed only 60 lakhs after 65 lakhs on Friday. Film further added
only 75 lakhs on Sunday and 40 lakhs on Monday. Film has collected
2.40 cr nett in 4 days and is heading for poor lifetime total of 3.50
cr nett.

Other release ''Sholay'' 3D was released across approx 850 screens and
grew marginally from Friday. Film collected close to 2.25 cr nett on
Saturday after 1.50 cr nett on Friday. Film further added 2.55 cr nett
on Sunday and on Monday film held up well with 1.05 cr nett figure.
Film has collected 7.35 cr nett and should collect close to 12 cr nett
in re run.