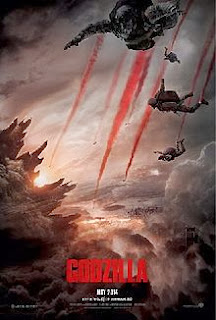 The official theatrical trailer of one of much awaited hollywood film
"Godzilla" has been out! Starring Aaron Taylor- Johnson, Bryan
Cranston, Elizabeth Olsen, Ken Watanabe, Juliette Binoche, David
Strathairn and Sally Hawkins, film is directed by Gareth Edwards and
Produced by Jon Jashni, Mary Parent, Brian Rogers and Thomas Tul. It
will hit the screens on 16th May 2014.

Here is the link of trailer of the film-
www.youtube.com/watch?v=QjKO10hKtYw&feature=youtu.be&app=desktop&persist_app=1&gl=US&hl=en-GB&client=mv-google&guid=
Author: Rahul Raz at 6:45 PM