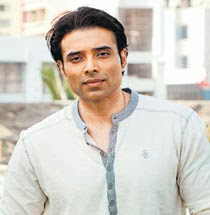 When asked about him about his father's film which he want to remake
then he told the name of Kaala Patthar. Kaala Patthar is starring
Amitabh Bachchan and Shashi Kapoor which was released in 1979.

Uday will seen as as Ali, in his upcoming film Dhoom 3. Also starring
Amir Khan, Aabhishek Bachchan and Katrina Kaif, film is all set to
release on 20th Dec this year.