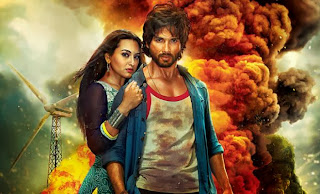 * The film starring Shahid Kapoor (as Rajkumar) and Sonakshi Sinha (as
Chanda). They are coming together first time. Sonu Sood (as Shivraj)
is also in lead role in the film.

* Film is directed by non other than Wanted and Rowdy Rathore
director, Prabhu Deva.

* Dialouges of film is writted by Shiraz Ahmed.

* Charmy Kaur done an item song in the film.Kannada actress Ragini
Dwivedi will be making her Bollywood entry in the same song which will
also feature Scarlett Mellish Wilson.

So guys get ready for R...Rajkumar.