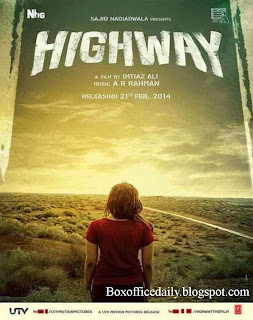 The first look poster of Student of the year actress Alia Bhatt
starrer upcoming film "Highway" is out! It is the second film of Alia
Bhatt. She will seen opposite Randeep Hoodda in the film. The trailer
of Highway is all set to hit the tube tonight (Monday, 15 Dec) at
8:30.

Highway is directed by Imtiaz Ali and Produced by Sajid Nadiadwala,
Siddharth Roy Kapur and Ronnie Screwvala. It is all set to release on
21st Feb 2014.