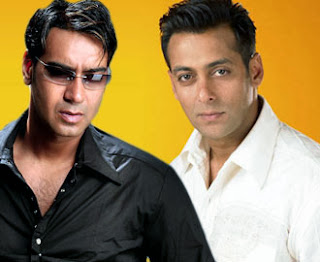 Bollywood actor Ajay Devgan has replaced superstar Salman Khan in
Tushar Kapoor's upcoming film. There was a lots of rumours that Salman
will feature in Tushar Kapoor's producing venture, which is the remake
of successful Tamil movie 'Kanchana' but now Tushar has confirmed that
his 'Golmaal' series co-star will play lead role in the film.

Tushar Kapoor has bought the remake rights of Kanchana, which was
Tamil actors Raghava Lawrence and Lakshmi Rai starrer.

The Hindi version of Kanchana will also be directed by Raghava
Lawrence. The shooting of film will start in August 2014.