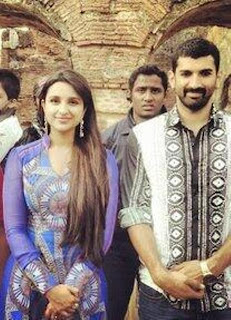 Here we are exclusively presents the first look of Aashiqui 2 actor
Aditya Roy Kapoor and and Parineeti Chopra from their upcoming film
"Daawat-E-Ishq".

Film is directed by Ishaqzaade fame Habib Faisal. It also stars Karaan
Wahi in lead role. This is the debut film of the Tv fame actor Karan
Wahi. Anupam Kher is in supporting role in the film.

The upcoming drama and comedy flick is under production and will
release on 9 May, 2014.