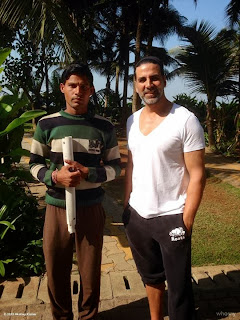 The relation between Akshay Kumar and his fans are just like crazy.
Everybody knows two months back, a crazy fans of Khiladi of Bollywood
created world record by making Biggest Ever Poster of his last film
'Boss'. And now we are presenting another crazy fan of Akshay, who
done that job which bigger fans are also can't.

According to the report, a crazy fan boy of Akshay reached superstar's
residence to meet him all the way from Haryana, covering whole
distance on foot. It took 42 days to reach Akshay's resistance. He was
also waiting for 5 days for the superstar.

Akshay Kumar informed about it via social networking site Twiiter. He
upload above photo and twitted-

"Just landed today morning after a good vacation. Was informed by my
frantic staff that some boy has been camping outside my house since
the past 5 days waiting to meet me........ I met him now and came to
know the poor guy has come to Mumbai on foot, all the way from
Haryana! It took him 42 days to get here!.... I was bewildered yet
happy that someone would do this for me. Thank you to each on… "
Author: Unknown at 4:56 PM